It Hurts when our Kids Separate from Us

The flyer came home on Monday. The last school trip for the 6th grade elementary school would take place at the end of May. They would be going to tour Citizens Bank Park and take a cruise on The Spirit of Philadelphia. “You’re not gonna volunteer to be a chaperone 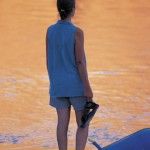 on this one too, right mom?”

The words stung sharp and deep. Surely, my son was kidding. Of course he would be honored to have his mother come along on another class trip, especially the very last one of his elementary school career. After all, I knew all of the kids. I had been classroom mom 2 years in a row, and chaperoned on many events over the years. This age is so cute to me. Most of them are still so innocent and unwordly. They are on the precipice of puberty, but haven’t gotten there just yet.

“Well I was planning on putting my name in for chaperone,” I sheepishly replied. “The trip sounds like fun and it’s the last one of the year. Once you get to middle school I won’t know all the kids like I do now. Besides, I like spending time with you.”
“But mom, you embarrass me. The other kids think you’re weird.” Ouch!

When did this happen? When did my 11-year-old son outgrow me? I don’t get it. I am so young at heart. I ski, I ride roller coasters, I go to concerts, I go on waterslides, I bike ride. I’m cool! I blend in. I’m the “fun mom”, or so I thought. Okay there was this one time last summer in Wildwood at Moreys Pier where my son and a group of his friends were going on waterslides. I looked at a very scary slide the kids were all going on and decided to try it. Max said dismissively that I would be fine. I summoned every ounce of courage and took the plunge. As I triumphantly got to the bottom, I held my hands up in victory, but there was nobody there to cheer for me. The kids had all moved on to the next slide without me….

Then another incident occurred recently when I put a note in his lunch box that I was so proud of him for making the travel baseball team! He didn’t know this yet as I had forgotten to pack his lunch and had to run it up to school. It was a cute little note with a smiley face. When I asked him later if he got the note, he informed me that he immediately ripped it up without looking at it because the other boys were teasing him about it. “Aw, your mommy put a little note in your lunch box,” they taunted. Who knew this would cause such a commotion? Maybe it was the smiley face.

“How could I possibly embarrass you? I love doing fun stuff and acting like a kid.”
“Yeah well the other moms just sit there and talk, they don’t get so involved. I just want to hang out with my friends without you constantly watching me.”

Wow! The needle was being pushed in deeper. I was a bit taken aback. My son didn’t want me around him anymore? The same little boy that used to hold onto my leg and cry for me not to leave him when I dropped him off at nursery school? Ashamedly, I started to cry. My feelings were hurt. Why was it okay to be his mom when he needed his dirty clothes washed, a hot meal on the table, or to be driven somewhere, but not when he was around his friends? When had my son outgrown me?

In being good parents, one of our roles is to teach our kids independence. We know that we have done our jobs when they don’t need us anymore and can stand on their own; when they finally claim their independence. He’s exactly where he is supposed to be. He is not “out to get me”. This is just a normal stage of his development. But at 11? I’m the one who’s not ready for it yet.

So why do I take this to heart so much? Growing up is a bitter sweet affair. I can’t wait until he doesn’t need a sitter anymore and can stay on his own, but I still want him to need me around- to actually like hanging out with me on occasion. Lately these occasions have gotten fewer and farther between. He’d rather be with his peer group or doing something sports-related. I have always encouraged that. I know it’s healthy. But I still want to be a part of his life. I still want to find ways to connect with him.
So it appears that we are both going through some growing pains. He is struggling towards independence, and I’m dealing with the parental separation anxiety that goes with it. Tonight the parents have a meeting about transitioning our kids into middle school. I just feel as though I’m not ready for it. The years flew by too swiftly. I want to hold onto my sweet, innocent little boy a while longer. I’m not ready for facial hair, body odor and girlfriends just yet.
So as for the class trip, my son and I agreed to a compromise. He agreed to let me put my name in to volunteer to be a chaperone with a couple of caveats. One, that this trip will be my swan song. Never again does he want me to get involved in a voluntary school-related function. This will be my last hurrah, a way of saying a goodbye of sorts to my involvement in a certain phase of his life. And two, I had to promise to keep my distance and not embarrass him (too much).

This entry was posted in Judy-isms, Mommy Blogs. Bookmark the permalink.

One Response to It Hurts when our Kids Separate from Us