To Play or not To Play: That is the Question

So here I am once again faced with a dilemma. This of course will be one of the many tough decisions I will have to make as a parent. Should I allow my 11-year-old son to be exposed to video games rated ‘Mature’, if they are being played at other people’s houses? 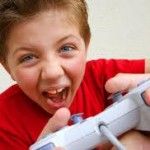 I am pretty adamant about my values and belief system. After the Sandy Hook massacre, now more than ever, I am opposed to my child playing these age inappropriate games. I won’t allow them in my home. For that matter, I have an opposition to them being played by anyone and anywhere, period. But at least if you are at the appropriate age, you can make these decisions for yourself. However, I see no benefit in offering players points for shooting people – none! Even if it is make- believe. Fortunately for me, my son has no interest in playing these types of games. In fact, he is revolted by them, preferring to play the sports games instead. Thankfully.

Other parents do not agree with my viewpoint on the subject and buy/allow their underage kids to play these games. They rationalize: “If he doesn’t play it at our house, he’ll sneak off and play it somewhere else.” I see this rationale mirroring the philosophy that parents might as well allow underage drinking at their house so their kids won’t sneak off and do it somewhere else. But in my mind, that doesn’t make it right. After all, it’s easier to just go along. What you allow your kids to do in your own home is up to you. Therein lies the rub.

What you are allowing your kids to do in your home directly effects my kid when he is invited over. Now a decision has to be made by me that I am currently struggling with. Do I allow my kid to come over to your house, knowing that something I oppose him doing is going to be going on there? I can’t tell you what to do in your home, although I’d rather not have my kid exposed to this sort of thing. Do I trust that I’ve instilled my morals and values enough in him that he will choose not to play? If he doesn’t play, will he be invited next time? Or will the other kids look down on him? Do I ban him from going there, risking ostracizing the other parent and making my son look bad in front of the other kids? Do I succumb to peer pressure and just go along?

These are the questions I am continuing to grapple with. As every parent does, I want to do right by my kid. It is my job to keep him safe. How much protection should I give him from the world around him? He will be exposed to more and more as he gets older and will need to make informed decisions. Is this just practice for what is to come? If he can “choose not to play” and still go over the other kids’ houses where he knows these games are going to be played, doesn’t that bode well and offer practice for other tough situations he may be in? Or will he be ostracized for not going along?

So my kid wants to go, and assures me that he will do something else when the kids all play Halo 4. The question is, do I let him?

This entry was posted in Judy-isms, Mommy Blogs. Bookmark the permalink.