Twelve-year old Leah arrived home from school sobbing. For the past two weeks, she had not wanted to go to school, was reluctant to talk about school, and experienced a slip in grades. Leah finally opened up to her mother, telling her that her so-called “friends” had been spreading rumors about her, excluding her, rolling their eyes whenever she said anything, and whispering about her in class.

Leah’s mom listened to her daughter, and wondered what prompted this behavior in the other girls. Leah’s mother discussed the incident with a friend, who told her that Leah was being bullied.

Does this scenario sound all too familiar? According to Palomares and Schilling who wrote How to Handle a Bully, bullying is:

According to a Fight Crime: Invest In Kids September 2003 news release, “for children in sixth through tenth grades, nearly one in six (3.2 million) are victims of bullying each year. An additional 3.7 million bully other children.

These beliefs are just two of the many common myths of bullying.

According to author, Barbara Coloroso, (The Bully, the Bullied, and the Bystander

) there are three types of bullying. 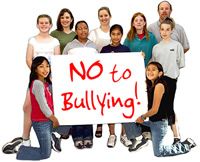 What a Parent Can Do

What can a parent do for a child like Leah getting bullied?

How the School Can Help

Schools are in a powerful position to stamp out bullying behavior. A weapon-free, safe environment should be mandatory. Many schools have anti-bullying policies already in place to work with bullies, the targets, and witnesses. Many have a “bullying box” where children can report bullying anonymously.

Parents can talk to their child’s teacher or counselor about any bullying situation. The child may be embarrassed or scared for the parent to do so; however, parents need to be an advocate for their child’s well-being. Bullying is NOT acceptable.

For more information about bullying, check out the following books by clicking on the image. Purchasing from Amazon.com through our website supports the work we do to help parents do the best job they can to raise their children.