An Introduction to Discipline

Disciplining children can be difficult. Do you relate to any of the following struggles parents have shared with us?

The discipline part of parenting does not come easily to everyone, and it can feel like a huge responsibility to do it correctly.

How you handle discipline issues has a large influence on your children’s self-esteem, the quality of your relationship with them, and the degree to which your children develop inner discipline.

But often parents don’t know the best, most effective way to impose the limits that their children need.

Part of the difficulty is that culturally acceptable forms of discipline in the United States have changed multiple times over the past century. 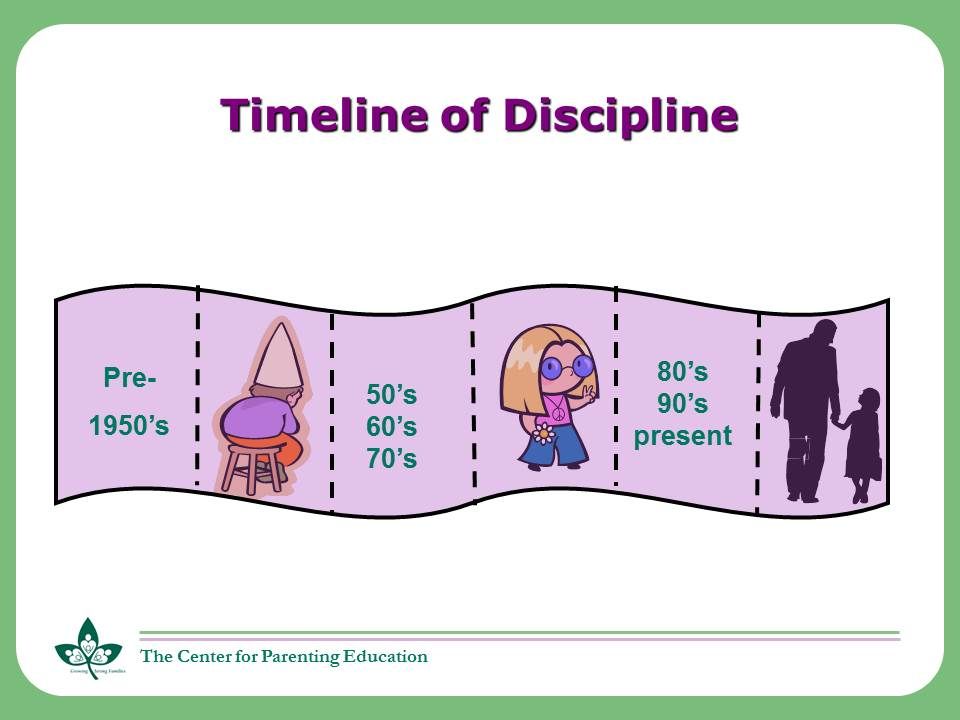 Research confirms that this mid-range is the best form of discipline because it:

There is often confusion about what discipline actually is. Webster’s 3rd International Dictionary defines discipline as “training that corrects, molds, strengthens, or perfects.” Education is often listed as a synonym.

The word “discipline” is actually derived from the Greek word for “disciple.” You can think of your children as your students and you are their teachers.

A disciple follows the mentor because there is a trusting relationship between the two in which the student feels safe and believes that he is treated fairly and with respect. As a result, your children will want to consider your direction as they map out their own course and eventually become self-disciplined.

Knowing that the goal of discipline is to teach your children can guide you in deciding how to react to their misbehavior. You can consider what it is that they need to learn from the situation when you discipline them.

For example, if your four-year-old daughter is hitting her younger sister when she gets angry, she may need to learn more appropriate ways to express her anger and frustration.

Sometimes people use the two words, discipline and punishment, interchangeably. However, there are important distinctions between them:

For example, let’s consider a parent’s possible reactions to the following situation:

10-year-old Sarah borrows her 14-year-old sister’s sweater without permission, then gets a stain on it, and throws it on the floor in her room. The sisters begin to argue and call each other names.

Is the following response from the parent a form of discipline or punishment?

Long-Term Effects of Discipline vs. Punishment

Over time, discipline leads children to internalize rules and hold themselves accountable for their own behavior. Discipline is:

While you may understand that the main purpose of discipline is to teach your children and that it is a healthier and more effective response than punishment, you may wonder how you can check yourself to see that you are not being punitive.

You can test if your discipline is too harsh and is actually punishment by seeing if you are aiming to meet one of the following goals:

1. Restore Safety
The discipline or consequence establishes or re-establishes an emotional or physical environment of safety for each person.

Example: A parent takes a play hammer away from a 4-year-old who is no longer using it on his work station and is trying it out on other, more fragile items like the coffee table, the kitty’s tail, and a glass bowl.

It is no long safe for the house or the kitty for the child to play with it.

What happens next? Your child may get very upset, object, yell, etc. so your next goal is to:

2. Calm Down
The discipline or consequence provides an opportunity for all who might need time to calm down, regain composure, and be less emotional to do so.

Example: The parent of the 4-year-old takes the hammer away. When the child melts down, the parent calmly leads or carries the child to a quiet area, explaining that the child needs to work through his feelings until he is ready to talk about the situation.

The parent may decide to sit with the child and even hold the child on his lap until things stabilize.

When the child calms down, then you:

3. Reinforce Rules
The discipline or consequence makes it clear that a family rule has been broken and needs to be re-established or re-instated.

Example: As the parent takes the hammer away from the 4-year-old, the parent firmly states, “The rule in our family is no hitting. That includes kitties, coffee tables, and anything else in the house that might be broken or hurt.”

This often needs to be done over and over again with kids. This brings us to the next goal, which is to:

4. Teach
The discipline or consequence provides information that raises awareness, increases understanding, or clarifies your values, responsibilities, or expectations.

Example: The parent explains to the child: “Things can get broken and animals hurt if they are hit with a hammer. We need to be careful with our things and treat the kitty gently.”

The parent asks the child or helps the child to come up with a plan for playing with the hammer in the future and how to play with the kitty without hurting him.

The whole point of using consequences is to teach children that their behavior has an impact on themselves and others.

5. Make Amends
The discipline or consequence provides ways for a child to correct something, which can include some form of restitution or fair payback that serves to correct and/or restore the relationship.

Example: The child is required to find a fun game to play with the kitty, make a card that says “I’m sorry,” or find some other tangible gesture that allows the child to feel competent and capable of making things better.

It doesn’t matter that the kitty does not understand these actions; what matters is that the child feels like he is contributing in some way to make things better.

In this way, the child is restoring the relationship and learns that he can make a mistake and still contribute to overcoming it.

10-year-old George was playing in the yard when he decided to go to his friend’s house. Although the rule in the family is that he is supposed to tell his mother before he leaves the house, he just left without notifying her. When she looked outside, he wasn’t there and she became worried.

An example of an UNHEALTHY punishment

An unhealthy punishment would be if the mother goes to the friend’s house, screams at George, calls him irresponsible in front of his friend, and tells him he cannot watch television for a month.

This is not a healthy or helpful response because the mother was disrespectful in calling him names, she humiliated him in front of his friend, and the punishment was overly harsh and long and was unrelated to what George did wrong.

A HEALTHY goal of discipline

A healthy goal of discipline in this situation would be one that teaches and reinforces rules.

An example would be if George’s mother were to sit down with him to explain why it is important for George to tell her where he is going and when – that she gets worried and needs to know that he is safe, and that in their house, people are courteous to one another by telling each other their plans.

This is being respectful of George as the mother teaches family values to him. The mom can then help George to come up with a plan for informing her of his plans or asking permission to go somewhere in the future.

Another HEALTHY goal of discipline

Another healthy goal would be to restore safety. In this case, George’s mother is concerned about George’s safety because of incidences in the neighborhood where children have been approached by strangers. She feels that George has not proven he is able to abide by the rule in the house about letting her know if he leaves the property.

She tells him that now he cannot go outside even in their yard without checking with her first; if, after a few days, he is responsive and obeys this new rule, they can discuss his being allowed outside the house without asking.

As you can see from these examples, sometimes the discipline you impose will involve a number of different parts and can achieve a few of the five different goals simultaneously.

There are many ways to handle any situation in a healthy and effective way; there is not just one right approach to disciplining your children. The specific discipline you use will depend on the situation, your values, and your child’s age, maturity, and temperament.

Some Things you Can’t Control

It is important to note that there are some behaviors and attitudes which parents often try to influence through discipline, but are actually outside of your ability to control.  You can influence and encourage the following, but not demand that your child:

You may wish to change any or all of the above in your children. However, it does not meet the five goals of discipline.

When you discipline, your overall goal should be to teach your children how to behave appropriately.

Think to yourself: What does my child need to learn? As you consider this, your discipline may teach him how to stay safe, calm himself, internalize the rules, understand your values, or make amends so he learns that people make mistakes and can recover from them.

It is helpful to keep in mind that even if you are striving to achieve one of these discipline goals and you know you are not being punitive, your children will most likely not appreciate your efforts and may have a different view of the discipline.

You can expect some grumbling, unhappiness, or resistance, but if you know that you are working to achieve one of these goals, you can feel confident that you are teaching your children important lessons that will help them to be successful in life.

If you apply discipline in a respectful way, it can actually be a tool you can use to build your children’s self-esteem and maintain a healthy relationship.

This positive relationship will make it more likely that your children will internalize your rules and values, thus helping them to become more independent and responsible in the long run.