LIBRARY OF ARTICLES::
Baby Through Preschool: 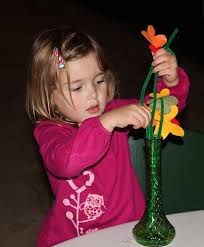 22-month old Lydia reaches for the glass vase filled with flowers. Her mother, giving her “the look,” firmly says, “No!” With a glint in her eyes, Lydia continues to reach for the colorful vase, repeating a chorus of “No! No! No!”

Just before the vase comes crashing to the ground, Lydia’s mother reaches her, uprights the vase, and yells; “You know you aren’t supposed to touch the vase.” Lydia bursts out laughing, which infuriates her mother.

Shortly after the above incident occurred, Lydia’s mother called a friend, voicing some common concerns among parents of toddlers. “Why won’t Lydia listen to me? If I don’t start teaching her now, won’t it just be harder as she gets older? What can I do?”

Three is the magic age

While you do need to teach your children proper behavior, it is best to save your efforts at true discipline till after your children turn three years of age. Remember that all children grow and mature at different rates; three is an average age at which children are typically ready for “discipline” and is given as a guideline. Your particular child may be ready a little before or after age three.

At around three, children will just begin (“begin” being a very important word) to have the maturity to monitor their own behavior and to control their impulses. When we talk about disciplining kids, we actually mean helping them learn to regulate their own behavior. That means when you give them information, tools, and skills they will be able to listen to you when you say “no” and to behave in ways that follow your values and society’s demands.

Prior to age three, most children do not have the inner control to stop themselves from doing whatever it is they want to do, nor do they have the judgment to keep themselves safe. It is your job as the parent to provide the external control that will protect them until they are able to protect themselves. You can do this by using “limit setting” techniques, such as:

You do all of this without an expectation that your under three-year-old will follow the rule.

As children mature, you can begin to expect them to gradually internalize the rules and behave according to them. It will actually take many years before you can totally trust that your children will curb their impulsivity and show improved decision-making abilities.

What can parents do?

So what can Lydia’s mother do now with her 22-month old? As Lydia shows interest in the vase, mom can:

When Lydia is older – after age three – mom can expect her to display greater inner-discipline. At this point, if Lydia reaches for the vase, the interaction could be as follows:

<additional articles in the Baby through Preschool series